Home From Abroad 231: A Piece of Cake 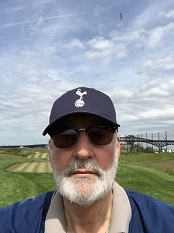 The last two weeks, as the rage about the murder of George Floyd overtook the country, some members of Trump’s inner staff were musing about the possibility that the president would give an all-inclusive speech, acknowledging the pain of the protesters and suggesting first steps towards national healing, as would be expected from the US President in these circumstances. Stephen Miller would write the speech, which was tentatively characterized as a ‘holistic revitalization and recovery,’ and it should have been a piece of cake for him because he only had to make sure that every sentence said something opposite to what he actually believes.  However, the plan faded, not because Miller lacked flexibility but because Trump could never have convincingly read the text off the teleprompter.  After a clumsy and rude attempt to enlist Floyd for his own cause, by claiming that ‘George would be very happy’ about the new unemployment numbers, the president spent most of the time leading up to Floyd’s funeral acting like a crazy old man at the end of a bar, tweeting ‘LAW AND ORDER,’ and ‘MAKE AMERICA GREAT AGAIN.’

On the day of Floyd’s funeral Trump tweeted a conspiracy theory, promoted by the neo-fascist cable channel OANN, that the 75 year old white activist in Buffalo who had been pushed by the local police and made fall backwards, cracking his skull, and who had subsequently been left bleeding on the pavement by the officers, was an ‘antifa provocateur’ who was trying to jam the police scanners.  Of course no other equipment than a cell phone was found at the scene and the whole story itself was a provocation, but the fact that the president jumped at it shows where his head is at, and that is not surprising.  After a lifetime of overt racism, starting with refusing to rent apartments to black tenants, followed by having black employees whisked off the Atlantic City casino floors when Trump, the owner, came visiting, then an aggressive campaign for the death penalty for the ‘Central Park Five’ and his refusal to accept their eventual exoneration by the legal system, and eventually his ‘birtherism,’ meant to undermine the legitimacy of the first black president, it can only be expected that from now on Trump will be more racist than ever.

A first sign is the choice of date and location of his first mass rally after the country ‘opened up,’ June 19th and Tulsa, Oklahoma.  On that same day in 1921 and in that same place some of the worst race riots in US history took place and over 300 black Americans were killed.  The day is known as ‘Juneteenth,’ a holiday to celebrate the end of slavery, which is commemorated as an alternative independence day by the black community.  Trump’s choice of Tulsa and June 19th is a direct provocation that makes clear that from now on for him the 2020 campaign is a race war.

On another front Trump is fighting the military leadership that would be willing to rename forts named for confederate generals but ran into a veto from the president, who tweeted that those names reflect ‘a Great American Heritage, a history of Winning, Victory and Freedom.’  It is not surprising that the president, who doesn’t know more about US history than a kindergartner, is not aware that those generals were primarily losers, but he should at least have known that they were traitors in their days.

As for fighting the COVID pandemic, Trump made a contribution by visiting a swab factory of which that day’s production had to be destroyed because he didn’t wear a mask.  Referring to the fact that he had called himself a ‘wartime president’ one observer noted that Trump’s attitude is equivalent to George Washington taking a long vacation after crossing the Delaware.